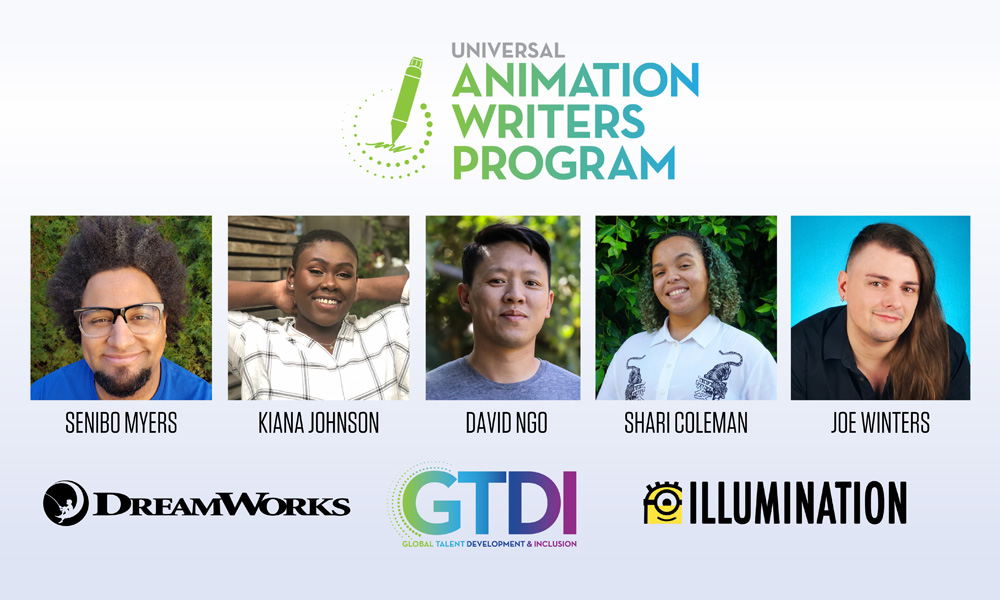 The Studio is proud to welcome its first group of participants: Shari Coleman, Kiana Johnson, Senibo Myers, David Ngo and Joe Winters. These authors were each selected for one of the three tracks of the program: a film track or one of the two television tracks intended for a different audience (preschool age 3-5 years or children 6-11 years). The first cohort will work closely with the creative animation executives of DreamWorks Animation and Lighting while they develop materials in the one-year paid program.

The Universal Animation Writers Program, designed and delivered by NBCUniversal’s Global Talent Development & Inclusion (GTDI) team, identifies and develops an inclusive pool of talent who can build on the Studio’s commitment to telling stories with narratives unique that appeal to and reflect the great diversity of its audiences. While the goal is to guide screenwriters towards staffing and development, the program will provide professional development as well as an immersive experience of the Studio’s production process through workshops, seminars, sponsorships and tables. rounds led by executives, filmmakers and showrunners.

In addition to the partnership with DreamWorks Animation and Illumination, writers will have the opportunity to collaborate with business units and production entities affiliated with UFEG and NBCUniversal, including Universal 1440 Entertainment, Universal Studio Group and Entertainment Group.

“DreamWorks has always been a place to build the dreams of unconventional heroes. This business requires diverse voices from unique backgrounds. Thank you to the Global Talent Development & Inclusion team for creating the Animation Writers program and highlighting underrepresented talent, ”said Margie Cohn, President of DreamWorks Animation. “We’re excited to dig in and start working with this group of promising writers.”

“Identifying and nurturing first-time filmmakers and talent has always been a central pillar of the Enlightenment process,” said Chris Meledandri, Founder and CEO of Illumination. “We look forward to working with the extraordinary group of inaugural participants of the Animation Writers Program to develop new and innovative animation projects.”

Shari Coleman (TV, Children 6-11): Born and raised in Los Angeles, California (although she calls herself “child of the world”), Shari Coleman is certainly a child at heart. Growing up after being touched by many animated shows and films, Coleman aims to create stories that will give voice to the unseen and the unheard of. Having the chance to do some international volunteering during her high school years opened her eyes to new cultures, experiences and wonders of the world we live in. Her career began when she suddenly realized, at the height of the season of university applications, that she, in fact, did not want to go to medicine and would instead turn to the cinema. A decision, to note, which made his father less than delighted. Still, growing up biracial gave him enough experience to constantly redefine people’s expectations and perceptions of him to prove him wrong. This is exactly what Coleman did by participating in CSU Northridge. With the distinction of receiving her BA in Film Production, she received the Hollywood Foreign Press Association Fellowship and Fellowship titles as well as the opportunity to direct her first short film, Home, which will liven up the festival circuit this summer. She was also fortunate enough to work at the Cannes Film Festival and to be personally recommended to the Academy Gold program (now Gold Rising). Coleman currently has TV credits for Disney Channel Superimposed and editorial credit for AMC Horror show: special animation.

Kiana Johnson (TV, Children 6-11): Originally from Texas, Kiana Johnson has spent most of her life walking up and down I-35. Born and raised in San Antonio, she graduated in 2018 from the University of Texas at Austin with a BS in Radio-TV-Film with a specialization in screenwriting. While at UT, Johnson co-founded the Black Film Student Association with two friends to provide a safe space and learning community for people of color. His awards include access to the second round in the AFF 2019 Comedy category and the title of “Class Clown” five times with unaffiliated organizations. After graduation, Johnson went shopping to finance his life in Los Angeles, writing and reading in his spare time. A queer black woman, Johnson loves to write characters that reflect the magic and diversity of the people she has met. She loves fantasy, sci-fi, and Whataburger, and argues it’s better than In-N-Out.

Senibo Myers (TV, preschool): Senibo Myers is a writer who enjoys exploring unique friendships between characters of various origins, experiences and identities, including people, animals and even inanimate objects. He holds a BA in Digital Cinema / Screenwriting from DePaul University, an MFA in Drama Writing from New York University’s Tisch School of the Arts, and is a proud #GirlDad. His writing has been featured in the Tisch Dramatic Writing Fellowship of New Works and the Black Is the New Black Play Festival, which he co-produced. Myers was a finalist in JJ Abrams’ Bad Robot mentorship program and a semi-finalist in the PlayStation Emerging Filmmakers program. He has worked at Nickelodeon, MTV, Spike TV, DreamWorks and ABC. He wrote for the MTV Movie Awards, People’s Choice Awards and America’s best dance team. For Myers, storytelling is an all-you-can-eat buffet, and he’s wearing his sweatpants.

David Ngo (Film): David Ngo is a current screenwriter, former TV executive, occasional speaker, sometimes filmmaker, still parent, frequent screenplay consultant, forever Vietnamese American, infinite pop culture enthusiast, and consistent podcaster, fulfilling his bingo card for a career in entertainment. Ngo’s job led him to appear on the NBC Writers on the Verge program, broadcasting celebrity news to E! Entertainment, teaching greedy minds at Cal State Fullerton’s Asian-American studies department, making a documentary about a beauty pageant for the elderly, photographing motels, writing texts without spoilers for the banners, wondering what They will do Saved by the Bell: the retirement home one day, and looking for the best untold stories he can find on his podcast, The best story I have ever told.

Joe Winters (TV, kids 6-11): Growing up in Northern Virginia, Joe Winters always felt like they were a little different from other kids in their Catholic school. It wasn’t until they were called “gay” (and subsequently Google searched for “gay”) that they began to understand this difference. Once they accepted and started exploring their sexuality, life felt a lot more complicated, especially when they were put into therapy because of it. It was during this time of uncertainty that they latched onto some fantastic animated shows to help them move away to faraway places where it was normal to be different. When they couldn’t be in these fantastic worlds, they found solace in the theater. This eventually led them to the Commonwealth of Virginia University, where they obtained their BFA in Theatrical Performance. After graduating from college, a series of unfortunate events plunged Winters into a deep depression. Fortunately, their time in the theater led them to discover the world of Drag, and “Zelda Peaches” was born. Drag not only helped save their lives, but also came to terms with their non-binary identity. Finally comfortable with who they were, they realized that instead of being in other people’s stories, they preferred to create their own. They wanted to write the kind of shows they needed when they were kids – animated, edgy fantasy comedies highlighting queer identities and mental health issues. Armed with this knowledge, they flew to Los Angeles where they studied television writing at UCLA. Since then they have worn many different hats on various productions including the opportunity to intern at Hi Qween!, a revered queer talk show. Their writing has also been recognized by The Script Lab, ScreenCraft, Launch Pad and Big Break from Final Draft.

The Universal Animation Writers Program is the second writers program for UFEG, joining the Universal Writers Program, the Studio’s long-standing program for live-action writers. The alumni of the Universal Writers program have achieved success in various films, TV series and television shows, including Juel Taylor, co-writer of Creed II, who is currently developing a project with The SpringHill Company of Universal and Lebron James; Sarah Cho, editor of the upcoming Hulu series and Universal Content Productions Plainville’s daughter; and Leon Hendrix, co-writer and executive producer of Cointelpro, a drama series in development at Peacock.

Many walk-in Covid-19 vaccines are available in Essex