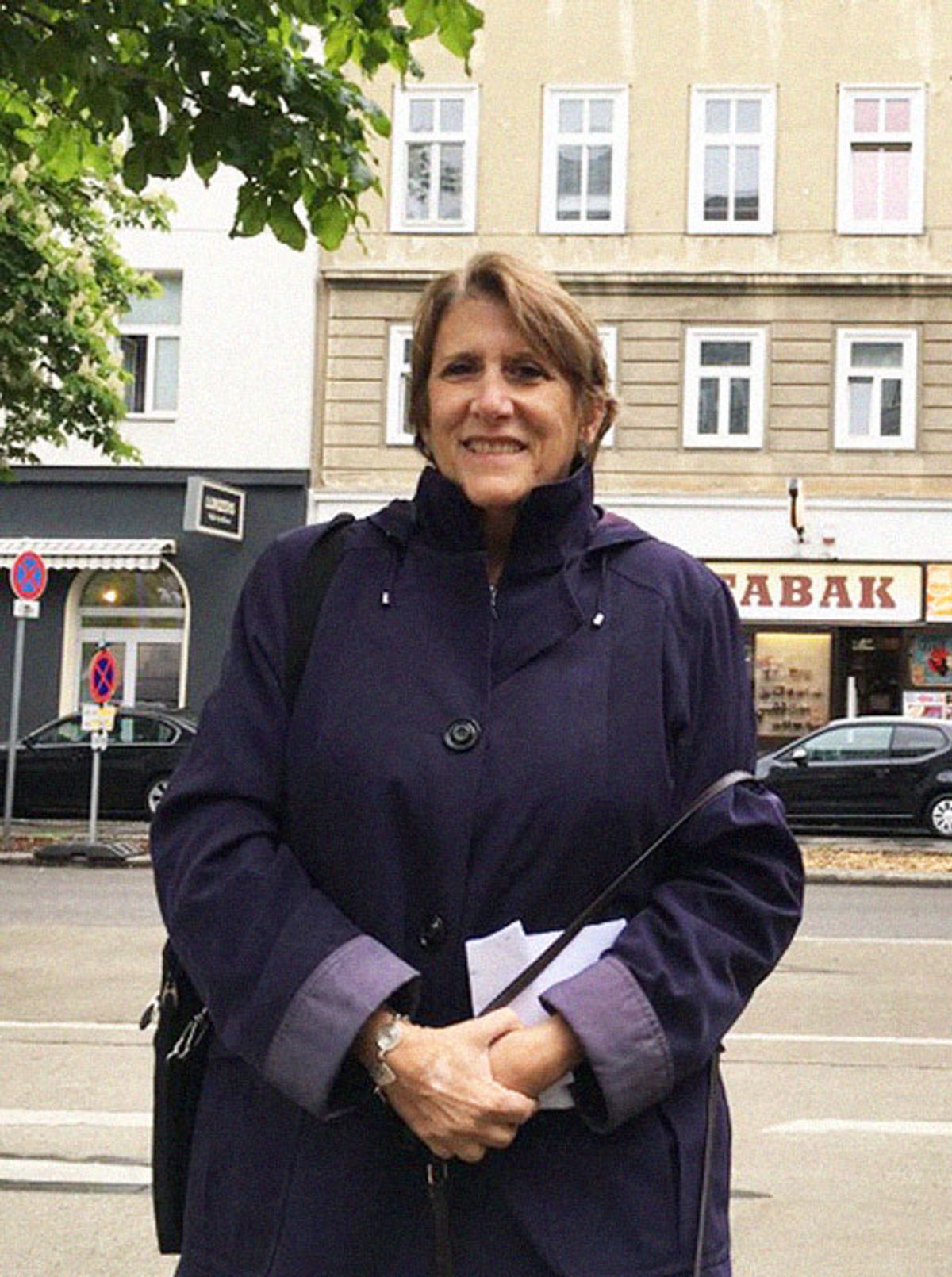 At the end of January, less than a week after the clash with the Synagogue in Colleyville, I received a call from the Austrian consulate in Los Angeles. My application for dual nationality with Austria had been approved. What surprised me more than the personal phone call was my reaction to the news. After more than a year of deeply mixed feelings, I was overjoyed.

Not that I had worried about being rejected. After September 2020, anyone with a “persecuted ancestor” in Austria was eligible to apply for restoration of citizenship. I knew I had a slam dunk case. Both my parents fled Vienna in 1939, forced to leave their families behind. Navigating a perilous new world alone, Rita Rosenbaum and Paul Jarolim met in Brighton Beach at an English class for refugees. My mother liked to say that my father was attracted to his Viennese accent. She felt like her home.

It was a cute encounter, only with Nazis.

Of their immediate family members, only one of my father’s brothers survived the war. All the others – my maternal grandparents, my father’s sister and his other brother – had been deported and killed.

My parents rarely had anything nice to say about Austria, if they said anything. When my mother spoke of the country and its people, it was usually with outbursts of vituperation. She hated the sudden fame in the 1970s of Arnold Schwarzenegger, the embodiment of Austrian muscular Aryanism. And she couldn’t bear the outpouring of praise for The sound of music. “With all that alpine schmaltz, you would hardly know the Nazis in the movie were Austrians or Jews were being murdered,” she bitched. My mother often swore that the Austrians were worse anti-Semites than the Germans and claimed that Kurt Waldheim, the Secretary General of the United Nations and ultimately the President of Austria, was a Nazi.

Growing up, I didn’t really believe her. My mother was a nervous person, a half-empty cup and, I thought, a little paranoid. Everyone knew that the Austrians were also victims and that the Germans were responsible for…everything.

Fortunately, my mother lived long enough to see the world – and me – learn that Waldheim had voluntarily joined the paramilitary wing of the Nazi Party and continued to participate in Hitler’s war efforts until 1945.

And she died before Schwarzenegger became governor of California.

But my mother kept a pressed edelweiss, that particular hairy flower, among her things. And there was one detail of happier times in Vienna that she liked to tell: that one of her uncles had been Sigmund Freud’s butcher.

After a lifetime of aversion therapy against the country and its language – although it is spoken at home like a “secret” code, German slips out of my brain when I try to learn it – I had no no desire to visit Austria. Still, Freud’s connection was intriguing. And when I found out that my great-uncle Siegmund Kornmehl’s butcher shop was at 19 Berggasse, sharing that address with Freud for 44 years, I started digging into my family history.

It was a cute encounter, only with Nazis.

It helps to have a connection with a famous person, if only by proximity, to access good archival material. A catalog of the “Freud’s Lost Neighbours” exhibition at the Sigmund Freud Museum in Vienna had a section devoted to Siegmund Kornmehl, detailing the exorbitant taxes levied on his butchery and the Aryanization of his butchery, as well as the post- war by Austria to the restitution of their property at every conjuncture.

That was just the tip of the iceberg, I realized. My grandmother had six siblings besides her brother Siegmund and I knew next to nothing about most of them. There were other Austrian Jewish archives, other family landmarks, which I wanted to investigate first hand.

In 2014, I put on my travel writer cap and headed for Vienna. I could use work as an excuse for the trip, and that would be tax deductible. I thought I had the perfect hook: I would be covering the commemorations in Vienna of the 75th anniversary of Freud’s death.

Surprisingly, I found a town that barely recognized its most famous Jewish resident. There was a larger-than-life statue in the heart of the city of Karl Lueger, the anti-Semitic mayor whom Hitler cited as an inspiration for Mein Kampf, but not a single one from Freud. No main street has been named for the founder of psychoanalysis. Even Viennese kitsch was Freud-free: while Mozart’s tchotchkes, including a white-wigged rubber duck, were everywhere, I didn’t spot a single bearded sage with round glasses.

Holocaust Wall of Names MemorialWith kind permission of the author

Strangest of all, even its namesake museum was virtually devoid of Freud. With the exception of the bookshop and the waiting room, of which Anna Freud returned some of the original furniture from London, where the family was forced to flee in 1938, the rooms of the Sigmund Freud Museum were largely empty. The museum’s planned commemoration of the 75th anniversary of Freud’s death – the only one I found in Vienna – was similarly minimalist: a “Hidden Freud” exhibition would display 16 images in biographically significant public places throughout the city, but the accompanying text would only be in German and only accessible via a QR code reader. Any foreign visitor without a translation or QR scanning app – or, God forbid, a smartphone – would be out of luck.

A city that could erase – or as Freud’s biographer Peter Gay put it, repress– a Jew of such international renown had obviously not come to terms with his Nazi past.

Still, I continued my visits to Vienna focused on personal history. And I began to notice changes in Austria’s attitude towards Freud and, more importantly, towards its less renowned Jewish ex-residents. On June 4, 2018, exactly 80 years after Freud and his family left Vienna, the first life-size statue of Sigmund Freud, made by Jewish sculptor Oskar Nemon, was dedicated outside the Medical University. from Vienna. The Freud Museum has undergone a major renovation that has brought its namesake to life. I began to see a proliferation of Freud dolls, keychains, and even a miniature plush couch alongside Mozart memorabilia.

Those bigger changes? Along with the offer of Austrian citizenship to the ancestors of those persecuted in 2020, the Holocaust Names Wall Memorial was inaugurated in Vienna on November 9, 2021, on the occasion of the 83rd anniversary of the Kristallnacht pogrom. Similar to the Vietnam Memorial in Washington, DC, in its simplicity it is very explicit about Austria’s complicity.

When the possibility of obtaining Austrian citizenship presented itself, I thought long and hard about the possibility of applying. I had no practical reason to seek a legal connection to the country. I don’t have children, I don’t need an EU passport – although I like the idea of ​​getting through immigration lines faster – and, despite my roots and recent pleasant visits, I don’t never warmed up in Vienna. I prefer more vibrant and gritty cities like Paris or my hometown, New York. And those who didn’t send my loved ones to be murdered.

Memories of Freud and Mozart, side by sideWith kind permission of the author

But if revenge is a dish best served cold, I was ready for dinner. Returning what was stolen from my parents, a statement that they couldn’t get rid of us so easily, wasn’t that reason enough to apply?

Apparently not, says my subconscious (thank you, Freud).

I completed the preliminary application in October 2019 and waited so long to respond that I forgot that I had already emailed it to the Austrian consulate several months earlier. So long I let my hair turn gray pandemic, then I started obsessing over putting gray images on my new Austrian passport (which I was a long way from getting). So long that I’ve read at least four other books about the Holocaust in Austria that have confirmed my mother’s claims about the country’s anti-Semitism.

And when I finally started working on the forms, I reversed their progress. It was around the time of the 2020 election, and Postmaster General Louis DeJoy had started toying with the mail. Expensive sorting machines were taken offline, mailboxes were physically deleted…and yet I dropped my original birth certificate, required to prove my identity and relationship to my persecuted ancestor, in a mailbox. letters that looked damaged and abandoned, perhaps unattended by a human postman for years.

But slowly, slowly, I gathered all the necessary documentation. I learned terms like ‘apostille’, a form of document verification. And, after running my fingerprints through a US government database, I confirmed that I was not wanted by the FBI.

In October 2021, I submitted the completed application.

Around the same time that I started visiting Vienna, I became aware of the rise in anti-Semitism in the United States. the Tree of Life synagogue shooting in 2018 — I started noticing anti-Semitism among progressives, my political cohort. On college campuses, in leftist groups, and in the apolitical professional organizations I belonged to, everything about American Jews seemed to be filtered through the prism of Israel and Zionism. Suddenly, I was no longer part of a persecuted minority, but of a white colonialist. Each statement in support of Diaspora Jews had to be cautioned with an addendum to the effect that “this does not mean that we do not support the Palestinians either”.

The gaslighting, especially instead of the expected alliance, was more menacing than the overt hatred of Jews. This meant that I couldn’t discuss my fears with progressive non-Jewish friends, or even several Jewish friends, for fear of appearing overworked, paranoid – all traits I attributed to my mother for so many years. years. Karma is a bitch, isn’t she?

The hostage-taking at the Colleyville Synagogue was a turning point for me. I was shocked to see how an obvious hate crime against Jews was minimized or explained away. By the FBI. By the press that did not insist that the rabbi saved the day, or that the Jewish clergy must now be trained precisely for these situations. By the crowd “no one died”, “it could have been a church”, “we hate all armed violence”.

And that’s why, I realized, the call from the Austrian consulate a week later seemed so satisfying to me. It wasn’t revenge I wanted after all, but clarity. I had needed a simple and straightforward acknowledgment of having been wronged and the offer of a remedy, however toothless and belated.

It’s distressing to feel more seen by the country that persecuted my family than I by the one where they found refuge. I can only hope it’s not too late for the tide to turn, and that future generations of American Jews won’t have to be grateful for restored citizenship and a memorial wall.