Review of the Loewe Fall 2022 collection from Paris Fashion Week 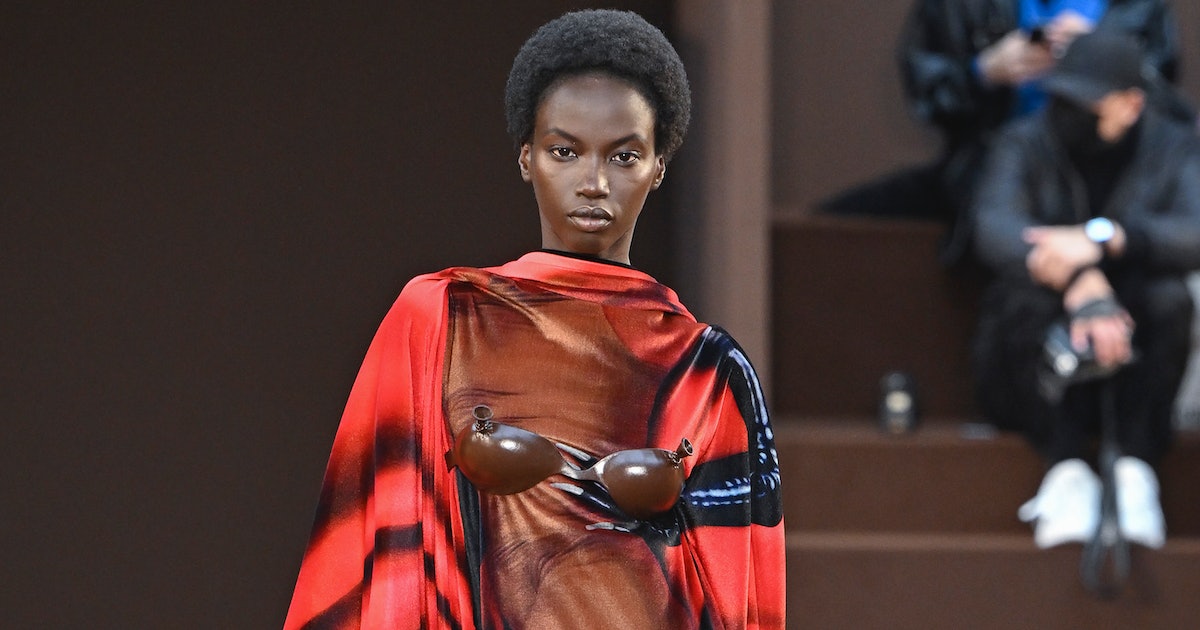 What followed was a continuation of the brand’s seismic shift to the extremes seen last season in the form of armor-like shapes and golden breastplates. For Fall 2022, there were automobile shapes outlined in dress hemlines, high-heeled shoes under wispy mesh layers, hyper-real lips or rosebuds cemented in dress busts, with a sheer fabric trailing underneath. Elsewhere, surreal touches shimmered throughout the collection in detail, such as 3D glitter balloons (they covered balloon-printed dresses across the bust like makeshift bras). We saw them again on rich dresses in jewel tones underlined by the shape of the body, giving a very trompe l’oeil effect.

A draped black dress had the same 3D flipped balloons in plump hues strewn throughout. From a distance, it might have looked like breasts, or even shards of skin. But that’s sort of the point with Jonathan Anderson’s Loewe lately – which seems akin to what the original surrealists offered when the movement started in the 1920s. At the time, surrealism was motivated by a reaction to the so-called rational logic and ideas that would have started the First World War. The Surrealists wanted to fight against this “rationalism” which they believed was guiding European culture and politics towards war, thus transforming reality. in the fantastic, or “an absolute reality, a surreality”, in the words of the poet and critic André Breton, who published The Surrealist Manifesto in 1924.

Surrealists were also inspired by the work of neurologist Sigmund Freud, using words and visuals to expand all the possibilities between dreams and reality. The goal was to tap into the unconscious imagination as a way to rethink everyday life. In 2022, when Russia has waged war on Ukraine and some uncertainty about the future of the ongoing pandemic still exists, it’s no wonder that this escape concept could inspire Jonathan Anderson for the fall. Moreover, all this detached anatomy – from the lips to the outline of the arms and hands – easily referenced Salvador Dalí, René Magritte or the surrealist fashion designer herself, Elsa Schiaparelli.

Anderson also emphasized less attractive clothing. Continuing to experiment with chunky lines and chunky shapes (both seen in previous seasons at Loewe and his eponymous label, JW Anderson), we saw sweaters with raised circular collars like pillows and flowing cardigans shaped like dress with padded sleeves.

Oversized outerwear was draped over the shoulders in odd but attractive directions and minimal colors. Neutral colored pants had raised fur waistbands; ripe with references, unintended or not, to Meret Oppenheim’s famous fur teacup. And while we’ve seen bits of these techniques before, like in the widened chunky lines and sculpted, armor-like tops, Loewe’s fall collection still felt fresh and relevant.

This idea of ​​making something “normal”, like fashion, weird again? It feels as essential as water during times like these.