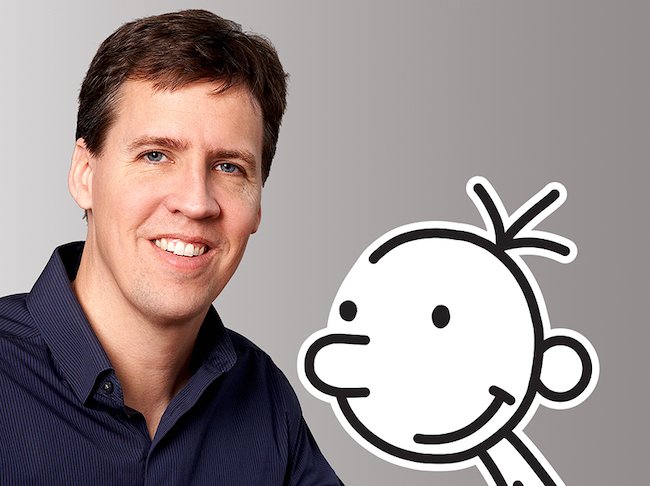 Jeff Kinney, author of the bestselling “Diary of a Wimpy Kid” book series, is on tour this month to launch “Big Shot”, the 16th installment of the saga. Kinney hits the parking lot of The Diamond on Wednesday, October 27, on the second leg of the tour. He will personally hand out signed copies of ‘Big Shot’ to attendees after going through a series of ‘Wimpy Kid’ themed festivities, with life-size characters replicating key ‘Big Shot’ moments such as Field Day, Trials and the first Goal. The event is sold out, but signed copies of the book are available on bbgb.

“Big Shot” continues the story of Greg Heffley, a cowardly, athletic college student, as he sort of clinches a spot on the basketball team. Previous “Wimpy Kid” graphic novels have sold over 250 million copies in 65 different languages, and the first book in the series has remained on the New York Times bestseller list since 2007.

Also known for the live-action “Diary of a Wimpy Kid” movies and the “Diary of an Awesome Friendly Kid” derivative book series, Kinney is one of the most important figures in children’s content today.

Calling from her bookstore in Plainville, Massachusetts, Kinney spoke to us to discuss how it all started.

Richmond Magazine: How did the “Diary of a Wimpy Child” start?

Jeff Kinney: “Diary of a Wimpy Kid, ”started out with failure, in fact. It was my failure to become a cartoonist that led me to try to find another way to publish my drawings.

Kinney: “Big Shot ”, is really a question of failure; it is a sports book for children who are not sports. I really try to let the children sitting at the end of the bench feel seen. It was me sort of. I try to give them a vocabulary so that I can laugh at the ridiculousness of the sports world.

Take for example the essays:… Whenever you make a mistake, the evaluator is there with their clipboard writing your number. And every time you do something right, there are no reviewers to find. So I was really trying to write about this stuff. In my book, Greg’s mom is sitting by the reviewers and watching the trials going on, and she’s actually blaming the kids… screwing up. So there is a lot of humor in these humiliating situations.

RM: Is it difficult to capture the mind of a college student like Greg?

Kinney: It’s pretty easy for me to write with Greg’s voice because he thinks about a lot of things that I think about. He’s a more exaggerated version of myself. He is an imperfect person just as I am an imperfect person; he is an incomplete person just as I am incomplete. So most of the time when I write for Greg, I write from my own perspective.

RM: How does it feel to meet and interact with your readers?

Kinney: You know, I write these books in isolation. I live in a small town called Plainville, Massachusetts where I do my job. And then it’s really important to see what’s going on on the other side – to present the book to the world and then meet the kids reading it. We shoot in a really unique way, we organize these events behind the wheel, so I at least have the opportunity to have a one-on-one moment with each kid, which really has an impact.

RM: If someone was in sixth grade when they read your first book, they would be 25 now.

Kinney: It’s really interesting, isn’t it? At this time, these children are no longer children. They are in this nebulous period where they are too old for my books, but they haven’t had any children of their own. I think it’s going to get really interesting in about eight or nine years when the people who grew up with my books introduce my books to their children, and they’ll probably feel my books differently than when they were younger. It will be interesting to see how my books age.

This article has been edited for length and clarity.

Tickets for the event, which include a signed copy of Big Shot and a photo with Kinney, are $ 15.89.