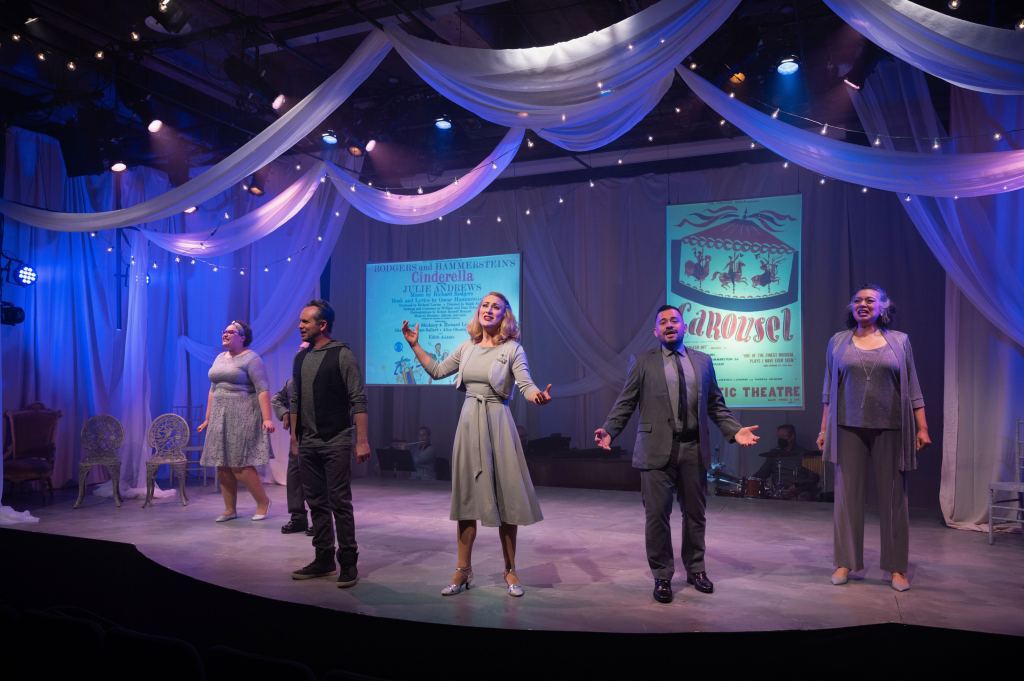 As more venues open to live shows, I’m excited to have more shows to write about, including Rodgers and Hammerstein’s musical revue “A Grand Night for Singing” featuring the couple East Bay all-rounder, Alison Ewing and Keith Pinto.

Produced by 42nd Street Moon, the show runs through March 27 at the Gateway Theater at 215 Jackson St. in San Francisco. Ewing and Pinto appeared in many Bay Area theaters as well as on Broadway and regional tours. The two live in Pinole with their Great Pyrenees dog.

“It’s just a big giant polar bear,” Ewing said. “The breed can weigh up to 110 pounds but luckily the females are a bit smaller with ours weighing just 85 pounds!”

In addition to her theater career, the versatile Goldfield founded a restaurant business, Martha Avenue Food, during the pandemic and plans to incorporate her love of theater and the culinary arts in the future. For tickets to “A Grand Night for Singing,” go to 42ndstmoon.org.

Antioch: Laurie Roldan also offers the public an in-person concert. Her lively cabaret concert, “Laurie Sings a Song for You,” will take place on March 26 and 27 at the El Campanil Theater in Antioch.

I was lucky enough to be in the audience when Roldan first presented the show at the Lesher Center in Walnut Creek in November. Now, new audiences can enjoy Roldan’s personal stories and beautiful voice as she sings a plethora of well-known Karen Carpenter melodies in the beautiful East Contra Costa Hall. Skillfully led by Rachel Robison, the concert features the incredible talents of musical director/pianist Brett Strader as well as Dillon Vado on drums and Pat Tinling on bass.

“I’ve always resonated with Karen Carpenter’s music,” Roldan said. “His songs have a message that fits my life.”

No stranger to local audiences, Roldan has been a guest performer at numerous special events and has appeared as a soloist with symphony orchestras across California. She has graced local stages such as Playhouse West, Tri-Valley Rep, The Willows Theatre, Diablo Light Opera and Contra Costa Musical Theatre. Roldan and her husband Dan also perform show tunes and standards for senior centers and retirement communities.

Guest singers for the March show include Anita Colotto, Stephanie Hill, Clarisse Nichole and Charlotte Jeffries. Roldan dedicated the March broadcasts to his friend and co-writer, Don Huntington, who died in January. A well-known figure in the Sacramento-San Joaquin River Delta region, Huntington was the former editor of 110 Magazine and an active Rotarian.

A portion of the proceeds from the concert will be donated to the Village Community Resource Center (VCRC), an organization supported by Huntington and his wife. Located in Brentwood, VCRC provides child and family support services in the areas of education, health and social services. “Laurie Sings a Song for You” will take place at the newly renovated El Campanil Theater, 602 W. 2nd St. in Antioch. For tickets, call 925-757-9500 or visit elcampaniltheatre.com.

Also in Antioch: “She Kills Monsters” continues at the Nick Rodriguez Theater, 213 F St. in Antioch, at 7:30 p.m. March 18 and 1:30 p.m. and 7:30 p.m. March 19. Presented by The Drama Factory, the play is about a young woman trying to connect with her recently deceased sister through a Dungeons and Dragons role-playing game. For more information, visit www.dramafactory.org.

“Seeing something created from scratch is a unique experience that can only be experienced on stage,” said Daniel Eslick, curator of arts programming at City Hall. “The past two years have robbed us of the opportunity to see this magic in person.”

Although this show won’t premiere until July, the company has plenty of other productions planned, including a series of artist recitals at 5 p.m. on March 20. This recital features tenor Alex Boyer and pianist Kevin Korth and will take place at the Piedmont Center for the Arts, 801 Magnolia Avenue in Piedmont. Go to festivalopera.org for complete information.

Martinez: If you like radio plays, check out the production of Four-Eyed Jacks March 18-20 at the Campbell Theatre, 636 Ward St. in Martinez. Grab some refreshments from the snack bar and enjoy the magic of old radio shows when Foley sound effects were created with lots of weird objects! Go to campbelltheatre.com for more details.

Sally Hogarty can be contacted at [email protected] Read more of his reviews online at eastbaytimes.com/author/sally-hogarty.