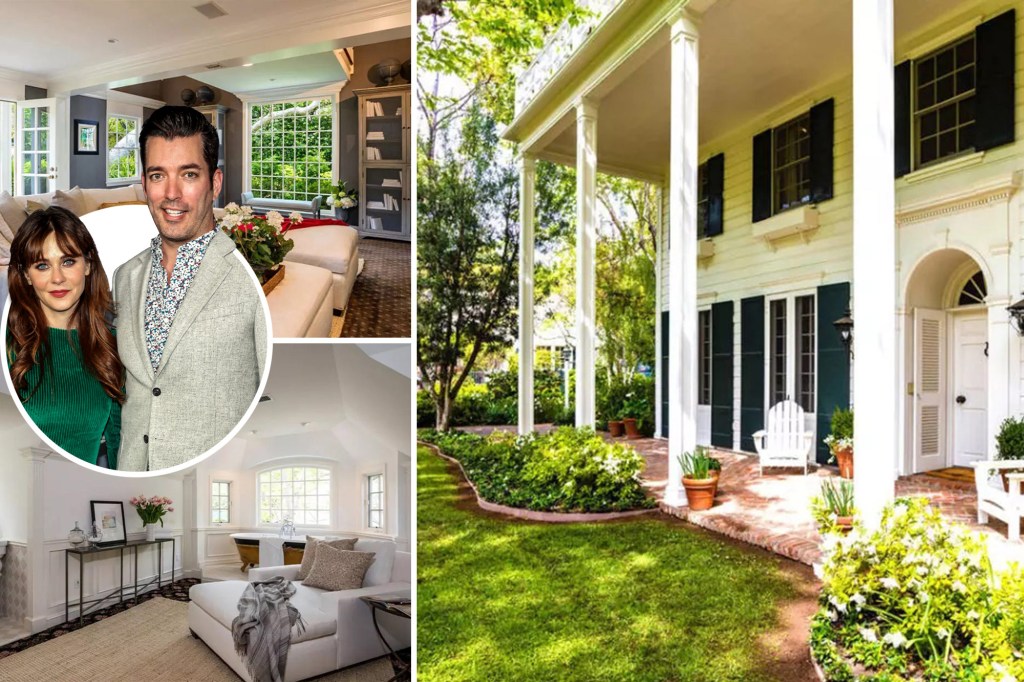 Zooey Deschanel and Jonathan Scott revealed earlier this month that they have purchased a “dream house” in Los Angeles.

And true to the brand, they plan to completely renovate before moving in.

Now, after a series of delays, they finally expect to move in next month.

In the January 7 issue of his magazine RevealScott, 43, writes a personal essay detailing the process of finding the house and immediately knowing it was the perfect place for them.

“As we parked the drive, it just seemed . . . magical,” Scott recalled. a park. That’s why when we first brought the kids to the property, they nicknamed it the Park House.

Deschanel has two children with her ex-husband Jacob Pechenik. She and Scott are not married, but say this house will be their “forever home” together.

“This dream home would become the biggest home renovation I’ve ever done in my career,” Scott wrote. But then the pandemic hit and a host of other delays followed due to supply chain issues and the closing of permit offices.

But after renovating more than 500 homes for other families, Scott was unfazed.

“We have each other, and we have time – the rest of our lives together in this house. Our house. Our dream home, where we will see the children grow up laughing and venture into the yard, where we will welcome our friends and family,” he wrote.

“I want the reveal to be perfect,” he wrote. “I’m sure we’ll change a few things once we move in, swap furniture. But overall, I want it to be as close to her vision as possible because I know that, like her, it will be beautiful, eclectic, and wonderfully unique.

Photos obtained by The Post show the house as they bought it.

Spanning over 6,300 square feet, the colonial-style East Coast property sits on a one-acre lot and was designed and built by famed Old Hollywood architect Gerard Colcord in 1938.

Surrounded by sycamores, which Scott and Deschanel, 42, said they love, the residence is located in the upscale neighborhood of Brentwood.

Scott and Deschanel had originally planned to update the bathrooms and be in the house by Christmas 2020. But they soon discovered the house had suffered water damage and a long list of other repairs and projects.

“Literally everyone on the planet who was building or renovating anything in the past two years is experiencing delays,” Jonathan said.

“I knew what our roles would be since Zooey appeared on ‘Celebrity IOU’, when I found out she absolutely hated demolition. I would clearly be the construction manager and Zooey would be my bonding designer,” writes- he.”As a couple undertaking a massive renovation project, if the most you disagree on is the placement of the sink and the recessed lighting, you’re probably doing fine.”

Interior features include a formal dining room with original woodwork and French door sets, a living room and lanai combo with a wood-burning fireplace, and an office.

The kitchen is fitted with stainless steel appliances and upstairs is the master suite which has its own fireplace and views of the gardens.

“What I found out early on is that Zooey loves Los Angeles. Like, love-love,” said Scott, a Canadian-born who owns a home in Las Vegas, IA. “She’s a native of Angeleno, her parents still live in her childhood home, all that stuff.”

“I remember thinking, ‘Okay, okay…give me the spiel,’ skeptically, not thinking of myself as an ‘LA guy’. But the more she showed me her Los Angeles – the parks she went to growing up, the neighborhoods where she made memories with her closest friends — the more I found myself falling in love with an Angeleno, and LA too.

Scott and Deschanel started dated September 2019 after they met during a recording of a “Karaoke Carpool Episode.

“Eight months into our relationship, I already knew that Zooey was the yin to my yang, the PB to my J. We were on parallel paths to the happiness we had been searching for all our lives,” Scott explained.

Loans that help you solve your car problems