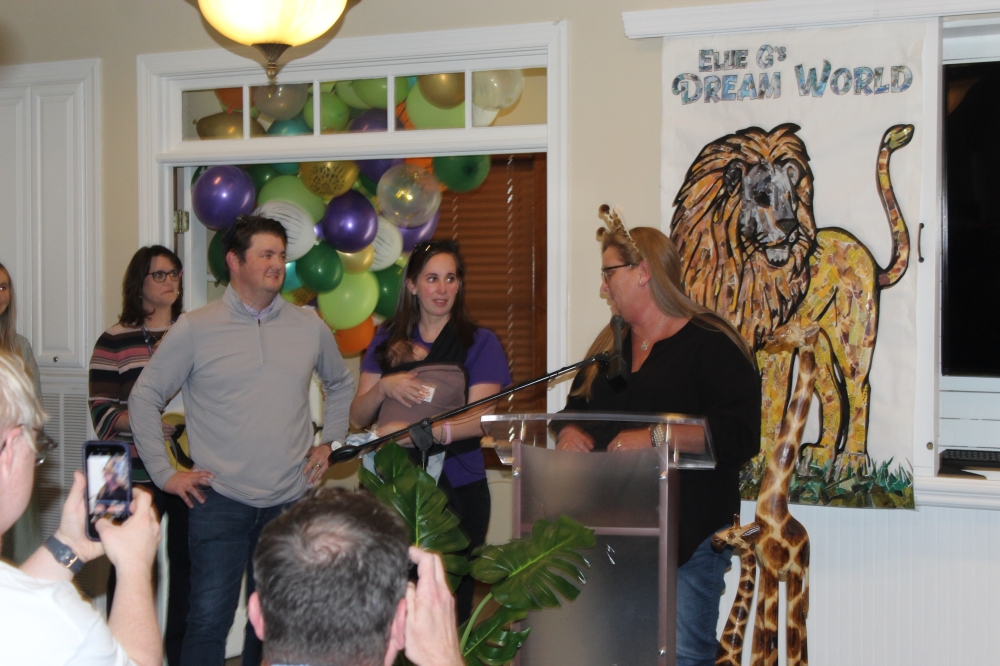 Franklin area leaders and residents came together on February 15 to kick off the fundraising campaign for the city’s first inclusive playground to be named in memory of Franklin resident Elliot Grace Castro.

The community-wide effort, led by nonprofit Friends of Franklin Parks, aims to raise $1.5 million from businesses and city residents to build Ellie G’s Dreamworld. , an inclusive playground in the future Southeast City Park Complex between Carothers Parkway and I-65. .

The project, which will include play structures for children of different abilities, walking paths, a pavilion and handicapped-accessible toilets, will occupy 3 acres of the city’s future municipal complex. It is overseen by the city, which has pledged half of the $3 million required to complete the work.

On February 15, Brandi Blanton, Elliot Grace Castro’s grandmother, and the girl’s parents, Brandon and Samantha Castro, stood before a packed house of friends, family and supporters at the Eastern Flank Battleground Park Event Facility to remember Castro and talk about the mission. of the park.

Castro died in 2019 at the age of 4 from a rare genetic condition linked to dwarfism, rhizomelic punctate chrondrodyplacia.

Blanton said being Castro’s grandmother changed the course of her life, giving her a mission to help approach and raise awareness in serving children with special needs.

“I’m a magazine editor turned director of development,” Blanton said. “We have countless friends from all departments [in Franklin] who look after our children with special needs. We are such a blessed community, and it’s a huge blessing to our family, and I appreciate it so much.

Samantha Castro said seeing the turnout for the event and the progress being made in playground design gave her comfort that Castro’s life inspired so many residents.

“It just surprised me a bit. I’m so grateful that it’s not just something from our past, but it will be something from our future,” Samantha Castro said of the planned playground. “I really appreciate everyone who is part of it and who is here today.”

Franklin Mayor Ken Moore said in a statement after the event that the facility’s inclusion in the proposed $39 million, 188-acre municipal complex reflects the city’s efforts to meet the requirements. the quality of life of a growing population.

“Diversity and inclusion are core values ​​in our community, and both the public and private sectors are always striving to find new ways to ensure that every citizen and visitor to Franklin, Tennessee has the same opportunity to work. , to live and play here.”

The Municipal Complex project will be completed in two phases, the first consisting of Ellie G’s Dreamworld playground, clubhouse and ADA-accessible restrooms. It will also include shaded structures to provide respite for visitors in hot weather.

A second phase will add sports fields, including those for lacrosse and pickleball; an outdoor fitness area; and an amphitheater, depending on the city.

Sponsorships for the campaign range from the $500,000 Tree of Life level to the $100 Leaf sponsorship level, depending on the campaign. However, Torrey Barnhill, executive director of Friends of Franklin Park, said donations of any amount are welcome.

In the near future, Barnhill said the non-profit organization hopes to recruit local school children to participate in the fundraiser.

The nonprofit organization Friends has pledged to match all donations up to $100,000.

“We want this to be a community-wide effort, and imagine how great it would be for kids to engage in an effort like this,” Barnhill said. “Every dollar helps us cross the finish line.”

To donate to the campaign, supporters can text the word “inclusive” to 615-551-4465 or email Barnhill at [email protected] to discuss sponsorships.

Checks can also be mailed and made payable to The Friends of Franklin Parks, PO Box 549, Franklin, TN 37065.