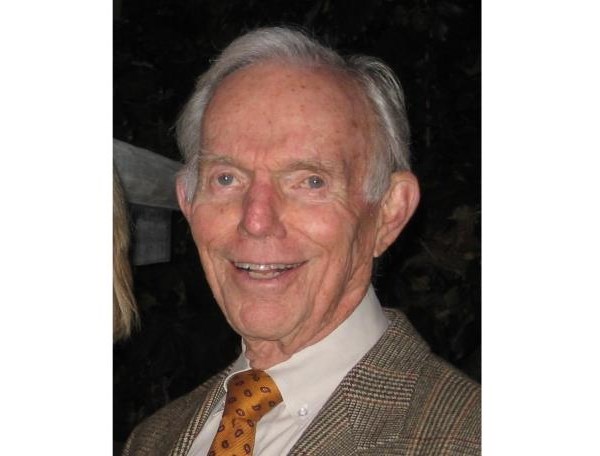 April 7, 1924 – October 15, 2021 Clark Downing McQuay passed away on October 15, 2021 in Pasadena, California, surrounded by his family. Also known from childhood as Bud and his grandchildren as Grandad, Clark was born in Alhambra, California to his parents Charles and Ginevra McQuay, where he grew up in an extended family. He has been particularly close to his sister, Dee Dee, and his cousins, LaVonne and Janyce, throughout his life. After graduating from Alhambra High School, he served in WWII as a medical officer and was awarded a Purple Heart for injuries sustained while moving a wounded soldier from the front lines. While a doctor, dad discovered his love for dentistry. After his service, he attended USC School of Dentistry, where he graduated in 1950 with a major in orthodontics. He established his practice in Westwood, California where he practiced until 1980 when he moved his office to Brentwood, California. After retiring in 1985, Clark taught his alma mater for several years and befriended many dental school graduates. Clark moved to West Los Angeles and eventually built his dream home in 1960 in Pacific Palisades, where they lived happily ever after until Audrey passed away in May 2019. They joined the Episcopal Church. St. Matthew, where they were active parishioners and made many lifelong friends. Clark was a long-time member of the church’s sacristy, and in his later years served regularly as a usher. Clark has also been active in his children’s lives as a member of the Westlake School Board of Trustees and has spent countless evenings attending sporting events and other school activities. Clark was a loyal and valued friend to many and was active in several civic and charitable organizations, including the Pacific Palisades branch of the YMCA and the Westwood section of the Rotary Club. Clark loved to attend performances at the Hollywood Bowl and he and Audrey have enjoyed their Tuesday night dressing room for over 50 years. He was also a strong supporter of USC athletics, especially the soccer team. He has been a season ticket holder for over 55 years. One of Clark’s greatest joys is being with his family – his children, grandchildren, great-grandchildren, nieces, nephews and family friends whom he has come to appreciate as his own children. Clark made everyone feel special and always cared deeply about their lives. Clark was a passionate and accomplished gardener, spending hours every weekend in his garden. He was a member of the Men’s Garden Club for many years and served as president during that time. He was best known for his darling begonias, which were so beautiful he and they were featured in the February 1986 issue of Sunset Magazine. Clark and Audrey were active members of the Bel Air Bay Club, where they enjoyed the beach, meals and spending. time with friends and family. They were also members of the Los Angeles Country Club, which Clark and Audrey both loved. Clark was an active member, serving on the membership committee for over 25 years. Clark was predeceased by his beloved wife of nearly 69 years, Audrey. He is survived by his children Tim (Julie), Carolyn (Robert), Diane (Richard), Robin and Alison (Todd), his beloved grandchildren Colin (Annelise), Laura (Vlad), Cara (Sara) , Kyle, Daniel, Tracey and Megan, great-grandchildren Molly, Maxwell and Logan, her sister-in-law Marilyn and several beloved nieces and nephews. A memorial service will be held at St. Matthew’s Episcopal Church on December 13 at 4:00 p.m. Donations on Clark’s behalf can be made to St. Matthew’s Episcopal Church or to a charity of your choice.

Tokini Peterside: Projecting contemporary African art to the rest of the world