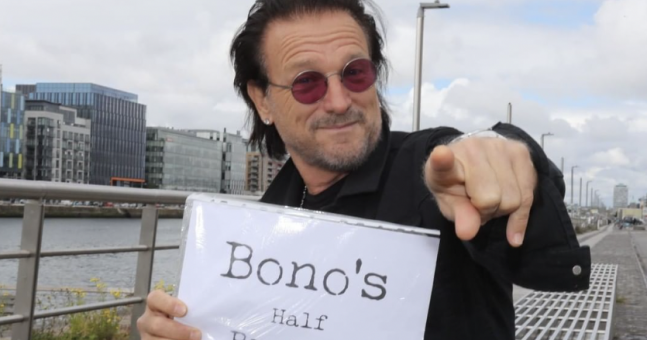 “I get stares no matter where I am”.

If you’ve read the latest installment of the OMGWACA books, you no doubt have vivid flashbacks to the presidential event where Aisling finds herself with the task of convincing a room full of delegates that an ominous and unconvincing act of U2 tribute is the real deal. If only she knew San-Fran-based Pavel Sfera, who makes a living posing as the leader. He regularly gets stopped in the street, and was even hired by Vogue to replace Bono for a photo shoot.

Speaking to Sean Moncrieff on Newstalk, Pavel said: “They (Vogue) called me out of the blue and said we were doing a photo shoot…and we need you to come if that’s okay with you”. He added that he could earn between €1,000 and €3,000 per appearance as Bono.

Pavel is also a passionate poet and gardener and, like Bono, passionate about charity work. He recently spent time working in Romania with Ukrainian refugees. He said of his time there: “I bought a one-way ticket, I thought I was going to die there”.

Pavel also spoke on Newstalk of being mistaken for Bono at particularly sensitive times – with people sometimes approaching him to tell him about deceased loved ones, who were huge U2 fans. He said:

I’m a poet – first and foremost in my life I want to connect with people and so when I get these stories that people have lost their mum or dad, I can’t break character, I can’t say” look, I’m not who you think I am so you know what I’m doing I give them as much humanity as possible.

His method at such times is to neither confirm nor deny that he is Bono – if people who approach him say they are big U2 fans, he just says “me too!”

What a funny life I’ve found myself doing Bono’s impersonation work. It opened amazing doors for me meeting people and sharing stories. Sometimes over coffee or a meal and often just passing by. Always a point to be kind and kind. People like Bono a lot. For a brief moment, we can share a mutual affection for U2 and what Bono brought to the world.

READ NEXT: One in two young people will not own a home by retirement age, ESRI report finds